One of the most unique parts of COLONTOWN is our neighborhoods. As most of you know, COLONTOWN has over 130 neighborhoods for all of your needs; we have everything from treatment plans to groups just for a specific diagnosis. I want to use this platform to highlight some of the different neighborhoods for current members and those of you new to COLONTOWN!

Luckily, I have connections to all of the secret groups within the CAREPARTNER COVE! Over the next week, there will be interviews with all of the groups! Today I’m talking with Andi Vanderhoek, an active member of COLONTOWN.

A little backstory: My mom found this app called Marco Polo, it’s basically a virtual walkie-talkie. You can record messages with video and view them any time. All of my mom’s friends from the CAREPARTNER COVE have a group on MarcoPolo where they can vent, talk about their day, ask for advice, or go on if they just need a laugh. MarcoPolo has taken over our lives so much to the point my mom and I ‘Polo’ from different parts of the house!

So on the daily I hear the MarcoPolo conversations, and they are actually so funny. I thought that the best way to interview Andi is via MarcoPolo.

Andi’s husband John originally went to the doctor for back pain. Andi said that the doctors knew it was stage IV even before the tests. John was diagnosed February 9th of 2017, and died April 16, 2018 (14 months). The first line of chemo stopped working, so it was time for a new protocol. Shortly after, John was diagnosed with the BRAF mutation. The mutation was so rare, John’s oncologists didn’t even know what it was. 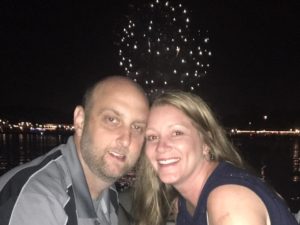 Because of the COLONTOWN groups, John was able to be in a clinical trial at the University of Chicago. Thanks to Steve Schwarze and the late Tom Marsilje (COLONTOWN’s original patient-scientist and founder of the clinical trials groups), the BRAF group helped John and Andi with the trials.

Andi found out about COLONTOWN through word of mouth. A friend of a friend who had colon cancer introduced her to the group. 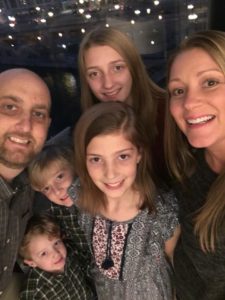 This is my favorite part of our MarcoPolo chat: I asked how COLONTOWN plays a part in her daily life. Andi says “Because of COLONTOWN I now have four BFF’s who are or were apart of the caregiver group and understand me.”

COLONTOWN gave Andi a new group of people who understood the ‘new Andi.’ People who are going through the same situation with the same emotions helped Andi, and for that she is forever grateful!