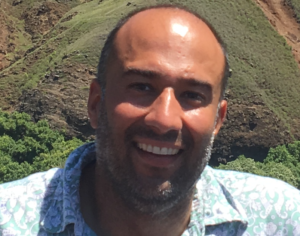 Sanjay is an attorney and a stage iv appendiceal cancer patient. This is the first post of a series by Sanjay.

For the better part of nine years I have been dancing with cancer.  I call it a dance as my cancer and I have both been locked, circling each other, intent on killing our dancing partner.  The fact that I am writing this, however, means that our dance has not ended; neither it nor I have succeeded in vanquishing the other.

While my story started when I was a bit younger than most, I have found that it is more common than I would have anticipated.  Now 42, I was diagnosed at 33 with stage IV appendiceal carcinoma.  A sharp ache in my side ultimately led to an appendectomy from which flowed a myriad of treatments, including more than eleven surgeries, including two cytoreduction/HIPEC (heated intraperitoneal chemotherapy) procedures occasionally called MOAS (the mother-of-all-surgeries), several years of differing chemotherapy combinations, four rounds of radiation treatments and four clinical trials.  The drugs taken catch on the tongue, each one often known by two or more names – (Xeloda (capecitabine), Avastin (bevacizumab), Campostar (irinotecan), Eloxatin (oxaliplatin), Lonsurf (TAS-102), Stivarga (regorafenib), Mekinist (trametinib)… the list goes on.  Some don’t even have names or only recently got them (AMG 510… soon to be called sotorasib).  In all cases they are intended to give me another weapon, another chance to keep my dancing partner at bay, in check and on its back foot.

To this arsenal I only have the luxury of adding one element; a burning, all-consuming desire to outfight, outfox, outmaneuver, and ultimately outwit my cancer in an effort to give me just… a bit more time.

For many, this is probably a blog to which they thankfully cannot relate.  While there are no doubt people who may be touched by cancer, for many their cancer journey ends relatively quickly – either they are one of the many that modern medicine has effectively cured, or tragically, they are one of the all too many who have lost their lives to the disease. There are those of us, however, caught somewhere in between.

My goals for these entries are relatively modest.  First, if you’re a patient or a caregiver, to provide a little hope and maybe a few tools as you work through your journey.  Second, if you’re a doctor treating patients, maybe providing a little perspective on what the patient is thinking, wrestling with and experiencing as they endure the indignities of cancer.

In these entries I am standing on the shoulders of some far braver people that came before me and there are two in particular to whom I am dedicating these words.

Many, particularly in the colon cancer community, will remember Tom Marsilje, the patient advocate and scientist who chronicled his own cancer journey and provided many patients, including myself, with the confidence that we, ourselves, could begin to unravel, and understand our own cancer, and just maybe contemplate its vulnerabilities and predilections in an effort to chase better, and more effective treatments.

Dr. Tom Marsilje was a 20-year oncology drug discovery scientist, including being a co-inventor of the non-small cell lung cancer drug “ceritinib.” He was a co-author on 25 scientific publications and was co-inventor of 19 Issued US Patents.

He was diagnosed with colorectal cancer (CRC) in 2012, and quickly realized that he had a unique viewpoint as both a Stage IV patient and as an oncology drug discovery scientist. He recognized that this unique dichotomy could be a powerful tool for CRC patient advocacy.  He could see and articulate both viewpoints of cancer: the patient viewpoint and the scientific viewpoint.  His advocacy was kicked off by being a Colon Club featured survivor in their 2016 Colondar 2.0 annual magazine, bringing national-level awareness to early-onset CRC.

Since that advocacy start, highlights included helping to create and run as lead scientist the COLONTOWN CLINICS CRC Clinical Trial online communities recently featured on NBC Evening News with Lester Holt and MSNBC and the release of a MSS-CRC curated clinical trial finder as featured by STAT News.

As a prolific writer, he wrote a personal blog on life at the intersection of being both a cancer patient and researcher with regular readership in 150 countries, “Adventures in Living Terminally Optimistic”, a science column for Fight Colorectal Cancer “The Currently Incurable Scientist“, and numerous columns on Stage IV cancer life and issues for the Philadelphia Inquirer newspaper and website.

Dr. Tom Marsilje passed away in the fall of 2017. His legacy of patient empowerment and the relentless search for better treatments – both as researcher and patient – remains at the core of the work of PALTOWN.

The other person is my mother, who lost her own battle with breast cancer in 2003 at the age of 54.  She was a brilliant person, a caring mother to both my brother and I and a devoted wife to my father.  There is not a day that goes by that I do not wish she lived in a time like now where her wisdom, intelligence and compassion could have been put to even greater use in fighting her own disease.  It is in significant part because of her that I write this; I know that she would not want her son to give up this fight.

Lastly, a word about my wife, who has been my life partner since I was a gangly 16 year old junior and she the 17 year old senior voted most likely to succeed.  While in these posts you will find me discussing a lot about genomic testing, overcoming adaptive resistance and staying on top of your own cancer mutations and upcoming treatments, in truth, however, I have had a secret weapon on this journey as well.  My wife’s sheer force of will has often been the bridge keeping me alive, literally willing me from the ICU bed to stand, walk, and even run again.  My hope is that, if you’re reading this, that you have someone in your life to serve that same role.