Welcome back to Sydney’s Corner!

Earlier this week I asked for volunteers to be interviewed for my blog, and I got a ton of responses! The first person to message me was Jacqueline Milhone, 33 years old from Madison, Wisconsin. 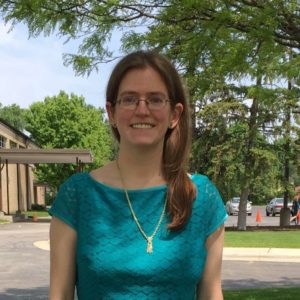 A high fever and abdominal pain originally sent Jacqueline to the emergency room. Since she was so young at the time, the doctors dismissed the inflamed spot on her colon from the CT scan and sent her home with antibiotics.

The pain in her abdomen got better, but slowly started to morph into a strong dull ache in her pelvis. At the beginning of June, her primary care physician sent her them off to a pelvic ultrasound. The day following the ultrasound, Jacqueline landed back in the emergency room with complaints of bloody stool.

The ultrasound didn’t show anything wrong with her reproductive organs, but did show an inflamed part of her colon. On to the next CT scan!

The original CT scan two months prior had not shown anything in her liver. This new CT scan showed a walnut-sized spot on her liver. She was then admitted to the hospital for further testing, with a scheduled colonoscopy two days later.

“I had a colonoscopy Sunday evening with a presentation the doc had never seen before. They took a bunch of biopsies which ultimately turned up suspicious but inconclusive. As a result, they had to biopsy the liver spot.”

Jacqueline was a candidate for surgery from the beginning, which meant  the doctors could remove the tumor on her liver. The weeks before surgery she was on a single round of FOLFOX, and had genetic testing.

Three weeks passed, and Jacqueline had a combined liver/colon resection. This was followed by 11 more rounds of FOLFOX. 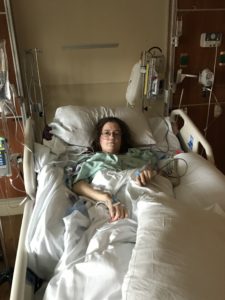 Jacqueline has been NED since surgery! The diagnosis of Lynch Syndrome helped her to make the tough decision about the surgery coming up that will remove her colon, uterus, tubes and ovaries, gallbladder and fix her leaking liver.

“COLONTOWN gives me hope and a place where people understand.’”

Jacquline is a part of the Lynchville Neighborhood, Tough Chicks, and the Crafters group.  She says, “I love that it’s such a give and take community.”

Tough Chicks was there for Jacqueline to comfort her when describing her symptoms. She was able to get a ton of answers on the spot, which allowed her to feel better about the situation until she was able to see her oncologist.

“What I like most about having all the different COLONTOWN Neighborhoods is that each one applies to a different part of the experience, and in doing so, I’m reminded that I’m not alone in this. My family and friends have been amazing, but there’s something to be said for being able to talk with people who’ve been where you are. I’m also not one to talk face to face, so the online nature of COLONTOWN has been wonderful for me.”

Thank you to Jacqeline for sharing your story!