In Memory of Rita Claflin 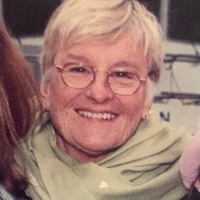 She moved to Hamden, Conn., at nine years old with her parents and two sisters, Marybeth (Keevers) Kelleher and Carol (Keevers) Corcoran. The family often hosted their Brooklyn relatives for clambakes at their summer cottage near Pawson Park in Branford, Conn., on the shores of Long Island Sound.

She graduated from St. Mary’s High School in New Haven, Conn., in 1952 and earned her associates degree from Lasell Junior College in Newton in 1954.

She eventually moved with friends from Lasell to Boston where she met her first husband, Larry Claflin, while working in public relations.

The couple first relocated to Swampscott then settled in Marblehead, where she raised her three children, Kara, Holly and Larry Jr.

She worked at the Colonial Hilton Hotel in Lynnfield for more than 10 years as public relations director, and it was there that she and Larry Sr., helped found the Jimmy Fund Golf Tournament, for which the two recruited professional athletes to compete and raise money for children’s cancer research.

From there, she opened her own children’s clothing store in Marblehead, The Children’s Hour.

Eventually she took a job in the support staff of Allergy Affiliates in North Andover and Salem, where she reconnected with Billy Clarke of Swampscott, who would become her second husband. She retired from Allergy Affiliates after almost 20 years in 2005.

“Reetsie,” as her grandchildren knew her, treasured every second she shared with her family, great-grandchildren included. Rita had countless friends, many from Marblehead, her home for more than 50 years. She was a passionate gardener and savvy bridge player. She was a world traveler, and visited Ireland three times as it was one of her favorite places.

Services will be held on Saturday July 10, 2021 beginning at 12:00 Noon at Our Lady Star of the Sea Church, located at 85 Atlantic Ave Marblehead. For more information or online guestbook, please visit Murphy Funeral Home or call 978-744-0497.

In lieu of flowers, please donate to COLONTOWN, an organization that she believed in, which provides support for colorectal cancer survivors, patients and caregivers.